My first real impression of San Diego involved a very muscular guy standing proudly on a roof deck containing loads of gym equipment.  He, of course, was not wearing a shirt and I think he may have even been flexing into a mirrored window.

Then the buildings cleared out and I saw an entire block simply covered in purple flowers and the muscle man was quickly forgotten.  As the taxi drove up to the hotel, all I could hear were birds chirping and I spotted the most gorgeous hibiscous. Don’t these sun worshipping Californians know it is January? Though on a work trip, the months of work-stress and winter ickiness literally started melting away with the beads of sweat accumulating on my forehead.  If I hadn’t been with a carload of people I work with, I might have just started running through the parking lot with arms wide open singing “The Hills Are Alive” like Julie Andrews.  Instead, I walked calmly to my room, passed a large sign for an herb garden (making a mental note to check it out at a later time), opened the door to my balcony overlooking the bay, and simply took a deep breath.

On Monday, a few colleagues and I decided to make a break from conference activities and headed to La Jolla to soak up some sun.  Camera in hand and surrounded by ocean and vegetation,  I didn’t think photographic opportunity could be any better. 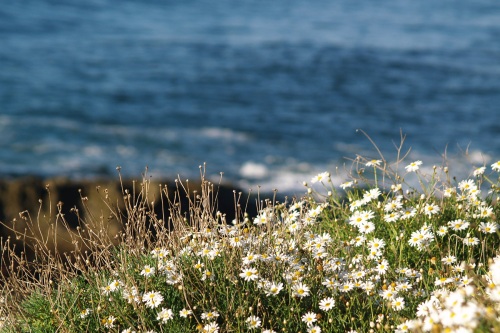 And then we saw the seals…and I lost my heart.  Tons of them, all colors and sizes, frolicked like fat little dough balls with the cutest faces you’ve ever seen.  They barked at us in gruff voices and “ran” on their bellies, enjoying the sun just as much as we were. We watched them for a long time in silence because their antics were just so engaging and captivating. I’ve learned a few things since.  First, it is rare for the seals to haul-out (leave the water to rest on the beach) very close to humans, so the situation we saw was incredibly unique.  Second, we were almost in time for pupping season. Oh how I would have loved to see the seal pups! I also learned from this great site about a recent controversy that may have resulted in the displacement of these dear creatures (but the seals and the good-hearted residents of La Jolla won, don’t worry).

Seals have a tough struggle, you know.  Though seal hunting has decreased due to a lower demand (always remember, it is always about supply and demand!), brutal hunting does continue.  This video by The Humane Society of the United States is both celebratory but shows there is still work to be done.   In Hawaii, Monk Seals frequently get caught in fishing lines and overfishing is diminishing their food supply. You can read more in this article.  And then of course, overseas the seals have to battle crazy men like Eddie McCarthy of Scotland (in this 2002 article)  planning to shoot them because they kill salmon and have “little to no financial value.”

I’m happy to say that on that gorgeous day in the “golden state,” the seals’ largest concerns seemed to be showing off for their admirers and taking a casual dip in the water every now and then.  You California folk have it made.